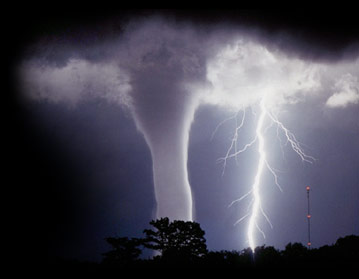 ”Satan works through the elements also to garner his harvest of unprepared souls. He has studied the secrets of the laboratories of nature, and he uses all his power to control the elements as far as God allows. When he was suffered to afflict Job, how quickly flocks and herds, servants, houses, children, were swept away, one trouble succeeding another as in a moment. It is God that shields His creatures and hedges them in from the power of the destroyer. But the Christian world have shown contempt for the law of Jehovah; and the Lord will do just what He has declared that He would--He will withdraw His blessings from the earth and remove His protecting care from those who are rebelling against His law and teaching and forcing others to do the same. Satan has control of all whom God does not especially guard. He will favor and prosper some in order to further his own designs, and he will bring trouble upon others and lead men to believe that it is God who is afflicting them.

While appearing to the children of men as a great physician who can heal all their maladies, he will bring disease and disaster, until populous cities are reduced to ruin and desolation. Even now he is at work. In accidents and calamities by sea and by land, in great conflagrations, in fierce tornadoes and terrific hailstorms, in tempests, floods, cyclones, tidal waves, and earthquakes, in every place and in a thousand forms, Satan is exercising his power. He sweeps away the ripening harvest, and famine and distress follow. He imparts to the air a deadly taint, and thousands perish by the pestilence. These visitations are to become more and more frequent and disastrous. Destruction will be upon both man and beast. "The earth mourneth and fadeth away," "the haughty people . . . do languish. The earth also is defiled under the inhabitants thereof; because they have transgressed the laws, changed the ordinance, broken the everlasting covenant." Isaiah 24:4, 5.

And then the great deceiver will persuade men that those who serve God are causing these evils. The class that have provoked the displeasure of Heaven will charge all their troubles upon those whose obedience to God's commandments is a perpetual reproof to transgressors. It will be declared that men are offending God by the violation of the Sunday sabbath; that this sin has brought calamities which will not cease until Sunday observance shall be strictly enforced; and that those who present the claims of the fourth commandment, thus destroying reverence for Sunday, are troublers of the people, preventing their restoration to divine favor and temporal prosperity. Thus the accusation urged of old against the servant of God will be repeated and upon grounds equally well established: "And it came to pass, when Ahab saw Elijah, that Ahab said unto him, Art thou he that troubleth Israel? And he answered, I have not troubled Israel; but thou, and thy father's house, in that ye have forsaken the commandments of the Lord, and thou hast followed Baalim." 1 Kings 18:17, 18. As the wrath of the people shall be excited by false charges, they will pursue a course toward God's ambassadors very similar to that which apostate Israel pursued toward Elijah.

The miracle-working power manifested through spiritualism will exert its influence against those who choose to obey God rather than men. Communications from the spirits will declare that God has sent them to convince the rejecters of Sunday of their error, affirming that the laws of the land should be obeyed as the law of God. They will lament the great wickedness in the world and second the testimony of religious teachers that the degraded state of morals is caused by the desecration of Sunday. Great will be the indignation excited against all who refuse to accept their testimony.

Satan's policy in this final conflict with God's people is the same that he employed in the opening of the great controversy in heaven. He professed to be seeking to promote the stability of the divine government, while secretly bending every effort to secure its overthrow. And the very work which he was thus endeavoring to accomplish he charged upon the loyal angels. The same policy of deception has marked the history of the Roman Church. It has professed to act as the vicegerent of Heaven, while seeking to exalt itself above God and to change His law. Under the rule of Rome, those who suffered death for their fidelity to the gospel were denounced as evildoers; they were declared to be in league with Satan; and every possible means was employed to cover them with reproach, to cause them to appear in the eyes of the people and even to themselves as the vilest of criminals. So it will be now. While Satan seeks to destroy those who honor God's law, he will cause them to be accused as lawbreakers, as men who are dishonoring God and bringing judgments upon the world.

God never forces the will or the conscience; but Satan's constant resort--to gain control of those whom he cannot otherwise seduce--is compulsion by cruelty. Through fear or force he endeavors to rule the conscience and to secure homage to himself. To accomplish this, he works through both religious and secular authorities, moving them to the enforcement of human laws in defiance of the law of God.

Those who honor the Bible Sabbath will be denounced as enemies of law and order, as breaking down the moral restraints of society, causing anarchy and corruption, and calling down the judgments of God upon the earth. Their conscientious scruples will be pronounced obstinacy, stubbornness, and contempt of authority. They will be accused of disaffection toward the government. Ministers who deny the obligation of the divine law will present from the pulpit the duty of yielding obedience to the civil authorities as ordained of God. In legislative halls and courts of justice, commandment keepers will be misrepresented and condemned. A false coloring will be given to their words; the worst construction will be put upon their motives.

As the Protestant churches reject the clear, Scriptural arguments in defense of God's law, they will long to silence those whose faith they cannot overthrow by the Bible. Though they blind their own eyes to the fact, they are now adopting a course which will lead to the persecution of those who conscientiously refuse to do what the rest of the Christian world are doing, and acknowledge the claims of the papal sabbath.

The dignitaries of church and state will unite to bribe, persuade, or compel all classes to honor the Sunday. The lack of divine authority will be supplied by oppressive enactments. Political corruption is destroying love of justice and regard for truth; and even in free America, rulers and legislators, in order to secure public favor, will yield to the popular demand for a law enforcing Sunday observance. Liberty of conscience, which has cost so great a sacrifice, will no longer be respected. In the soon-coming conflict we shall see exemplified the prophet's words: "The dragon was wroth with the woman, and went to make war with the remnant of her seed, which keep the commandments of God, and have the testimony of Jesus Christ." Revelation 12:17.

-From the book Great Controversy, by Ellen G. White, Chapter 36, page 590-592.
Read more about this topic in this book on the website www.greatcontroversy.org